The MonaLisa Twins’ second original album provides listeners with a whole new experience. While staying true to their roots – The Sixties – this album branches out into new, more experimental territories of musical styles. You can expect a very tongue-in-cheek side of the MonaLisa Twins. Check the tabs below for more info.

Join the MLT Club to get your CD signed. All members get their purchased CDs autographed. More info here.

the Beatles have a had a great influence in my life they are part of my teenage period. The Monalisa twins, unlike others who do Beatles covers, capture the spirit of that era and for that they are very successful. good work and keep the rocks rolling

Freshness is written all over the tracks and the cover of Orange. It’s definitely a step forward in making your own music, while absorbing the classic 60’s sound and style. One thing that tells me that you have succeeded is the fact that my kids love the album. What’s even more important is that the newest generation, my five years old granddaughters can’t get enough of Orange. Well, they love the Beatles, so it was expected in a sense. I’m glad I got the LP, as the artwork comes to its own. The attached photo was taken a couple of years ago. 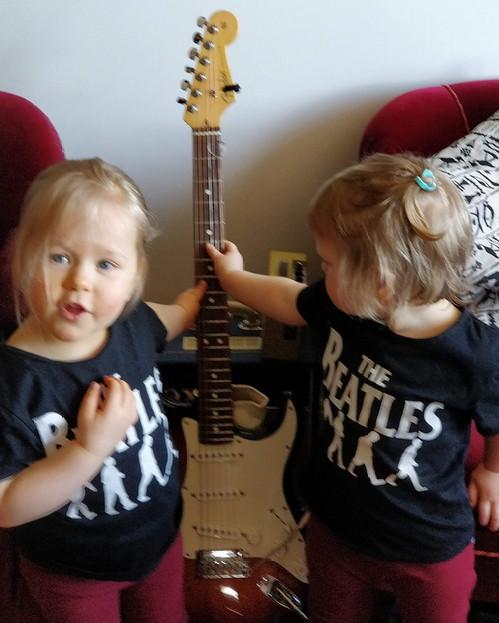 I just bought the complete collection of all of their albums just a couple weeks ago. I had heard of them through the years, but never heard them. I finally did. About two months ago, I listened to song after song on YouTube. I realized that I loved every single thing that I was hearing. I have been going through all of the CDs and just enjoying these beautiful young musician’s performances one after another. This particular album, ‘Orange’ is outstanding. Personally speaking, my favorite song of their own songs that they wrote, is on this album. ‘Still A Friend Of Mine’ I have to admit, I’ve listened to and watched it well over a hundred times. I would buy this CD just for that song, but that’s me. Luckily however, every single song on the album is amazing. There’s a really special treat also on a couple of the tracks. John B. Sebastian of The Loving Spoonful joins these two phenomenal musicians, and adds his own special touches on the blues harp (harmonica) that he is so well known for. Perhaps you’ll remember him better for the theme song of ‘Welcome Back Mr. Kotter’ depending on your age. I promise you that you won’t regret your purchase in any event. These two young ladies are bottled sunshine!

I 🇨🇦♥️ the Twins. i listen the Beatles it out of World.
i am in your music and as orginal Artist i may only speak for myself.
I ♥️ John but i hope you stay away from Politics.
God Bless the Two Twins
Rocky 🇨🇦😘

O.K. my first question is “how did this get under my radar?” What a great album!
Having only just become aware of the MLT I now have6 cd’s and eagerly await the next one’ original or covers.
From the delightfully playful “no more worries company”, the endlessly referencing hippy trip of “once upon a time” to “club 27” ( what a rocker!!) this album and its creators are just refreshing, enchanting and yes, groovy.

There is not much I can add to what’s been said in your reviews already, except that after listening to Orange and Play Beatles and More albums they just reaffirm my adage “That without music, we would be speechless.” May you two go one forever, I love everything you do.
Bernard Wood

Hi, MonaLisaTwins and MLT Universe! I love this album! It is the first CD I ever purchased from MonaLisa Twins, and I loved it from the start! If I said I had a favorite track, then I would think of another one and I don’t know if I’d pick just one. I love them all. I will say that the “That’s Life” video is one of the first I ever saw when I first “discovered” MonaLisa Twins; there is just something about the sound, and then in the video, I fell in love with Mona and Lisa’s playfulness (especially Lisa chewing on her hair and then Mona sitting so passively during the video but then being the one to act most upset when the TV malfunctioned. LOL — It’s things Iike that which fans can relate to and love. I love “Once Upon A Time,” and I re-“discovered” John Sebastian and Lovin’ Spoonful also because of it (he plays harmonica (or mouth-organ) on the song, and is in the video) so thank you, Ladies!! And “Still A Friend of Mine” brings tears to me every time, during the song bridge (especially when they sing “so we might start to talk about what we don’t dare to see, and maybe find the child in you and me”) and it reaches right into your soul when they sing “and only love will set us free.” This album runs the whole spectrum of emotion, including the dance-and-feel-good “No More Worries Company.” It has it all! I’m seeing Orange, and I love it!! Peace, and Stay Groovy! Love, David : )

First I have to say I love the cd Cover. I enjoyed watching how Rudy comes up with a way to do this in their own Dinning Room. Just amazing how everyone worked together, Rudy, Michaela, Mona and Lisa and made it happen. Great Family and Team Work. The thing with music especially your own music. You want your next cd to be better than the previous one. Ladies you have done that here. Congratulations. I will say this but my favorite original song by you is The Wide Wide Land. A very touching song for your Grand Mother.
Orange – Where to I start. Ahh !The Future. This reminded me of the Beatles NO.9. I was waiting for George to say Eldorado No More Worries Company. Was this song about caretaker in a nursing home? Once Upon A Time dealing with the Woodstock Generation. I was at that festival I enjoyed the video of this song. Seeing John Sebastian in his tye dye jacket. I can see him on stage in my mind. Love the words to close to you. It’s all right. It’s ok. Where there is a will. There is a way. Great Line. Waiting for the waiter. John Sebastian was great in video. You girls are to nice. I would have track the waiter down. Just kidding … I’m in it for love. Great singing by Lisa. Song had an old time flare to it. Love it. Count on Me a great duet. Both your voice are angel like. Sweet Lorraine more like a jealous Lorraine.
Good song.. Now That’s Life – My second most favorite song.. So Cool.. Life experiences, peaks and valleys. Also Mona great harmony it makes the song. Club 27 song about all the stars we lost at that strange age. Want to stay away from that Club. Now what I think is the best song lyric wise and music is Still A Friend of Mine. Lisa great vocals on this song. Very haunting but great. Touches the heart.
Well I can’t wait until you make your third cd with your original songs. That’s where you want to be Ladies… Stay Groovy.. Peace and Love…

The MonaLisa Twins’ much anticipated follow-up original record to their debut album “When We’re Together”. 5 years have passed since the release of original material while the Twins played countless shows all over Europe, moved their residence to England, and learned some important life lessons. In other words … they lived life.

In comparison to their first album, which was still written in their teens, ORANGE gives a more mature, sometimes satirical, yet overall still light-hearted approach to topics we all deal with. Love, community, doubt, the past and future and the generally unsettling direction society seems to be taking.

While staying true to their passion for melodic, quirky songwriting, plenty of harmonies, a very “60s” sound and twangy guitar licks, this album branches out into new territories and incorporates very psychedelic but also earthy, bluesy, sometimes even jazzy tones. Built upon everything you loved about their debut album, you can expect to hear a more experimental and very tongue-in-cheek side of the MonaLisa Twins.