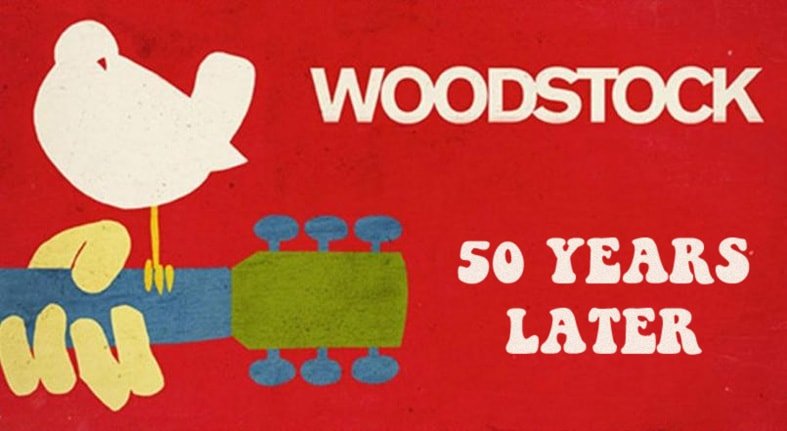 Woodstock, August 1969, the world’s most iconic festival – remembered for its cultural significance, great music and message of ‘love and unity’. A look into its history, however, will also reveal some less flattering sides. Woodstock’s later reincarnations had their shortcomings and ‘Woodstock 50’ never saw the light of day.

So what about the ‘Three days of nothing but Peace & Love’?

If you look at it on paper, one could say that the festival certainly had its … issues. Woodstock lacked in basic food and water supplies, sanitary facilities and medical resources, transportation logistics and many other areas of organisation.

They had one toilet for every 833 people with people opting to take their business wherever they saw fit. No blue portable loos, no food trucks selling gluten free Halloumi fries, “Glamping” tents or V.I.P passes … Instead, lots of mud, spiked drinks and tripping teenagers.

According to one nurse, burned eyeballs were actually a thing at the festival. They appeared to have resulted from kids on LSD who would lie down on their backs and just stare at the sun.

Not even the artists and stage staff had a particularly easy job to keep the show running. Delays due to bad weather and a plethora of technical problems caused some artists like the Grateful Dead to call their show the worst performance they ever delivered.

If things like that happened today you could expect „money back“ claims, lawsuits and calls for health and safety galore. Not to mention all the cases of, should we say, public indecency.

Then there is the fact that Woodstock certainly wasn’t the first, the only or even the biggest festival of its kind. Bob Dylan left the States only a day before Woodstock to play the Isle of Wight festival, which had an estimated 600 000 visitors, surpassing the attendance of Woodstock by 200 000.

Last but not least, the artist line up, while excellent, lacked the most popular acts of that time, like the Beatles, the Rolling Stones, Led Zeppelin or Dylan.

Then why is Woodstock viewed as the “Most important Music Festival of All Time”?

Well, we haven’t been there, weren’t even born back then. All we have is second-hand information – from reading stories and interviews, from listening to its music and watching the documentary, and from talking to people who experienced this event from their personal viewpoint.

There is no denying that there was something special happening between the artists and the audience. A kind of „we’re in this together“ thing. People seemed to view it as a manifest of “their” cultural movement.

Considering all that, it looks to us like a victory of imagination over reality.

Obviously, enough people wanted Woodstock to be an example of love, understanding and peaceful togetherness, so it became one. Despite all the problems, or maybe just because of them.

It was an adventure. There had been obstacles to overcome, problems to solve and statements to make … “Woodstock” as a whole became the statement. Against the Vietnam War, the establishment, intolerance, … and for “peace and love” (we only mention the constructive ones here). In that case, less seemed to be more. A lack of organisation led to people organising themselves and even having a good time doing so.

When we wrote Once Upon A Time we took all the positive and inspiring aspects we feel about that time, or even just shamelessly implied them, as did many others before us. We are in good company there.

If Woodstock wasn’t about honest music, brotherhood, peace & love, it at least could or maybe even should have been so.

What do you think? Did you attend, do you know people who did … or have you experienced it as a contemporary witness from somewhere else in the world?

Are people just romanticising a failed social experiment or has it been this example of peace and solidarity we should all learn from? How did you see it back then and how do you view it now? And lastly, we are curious about what people of our generation think about the Woodstock phenomenon.

We’re looking forward to reading from all of you in the comments below!

The couple whose picture is on the cover of the Woodstock album live in my neighborhood and are still going strong.

I was too young to attend. But I remember being returning from a car vacation out west and picking up a hitchhiker who was headed there. Stayed a few days with us. I thought it was about peace and love (all those signs, you know), despite all the drugs and nudity. The music was great with Joni Mitchell song and all. Heard another version of that song, kind of a more rock version.
Great times!!

I love your stuff, especially your Beatles covers. Donovan and Joni Mitchell are good too.
Your own stuff is also great especially wide wide land, songbird and I don’t know birds. Innovative. Kind of get to your soul. Couldn’t be happier.

Reading Bob Weir of The Grateful Dead it is understandable why he though it was their worst set: https://www.rollingstone.com/music/music-features/woodstock-grateful-dead-bob-weir-855472/

It took on the significance that it was being professionally recorded and filmed, and started professional relationships in the latter that have lasted until the present day. two of the editors working on the film were Martin Scorsese, and Thelma Schoonmaker, who are still working together to this day as Director and Editor.
Then there is the Joni Mitchell song, made famous by herself, and the Crosby, Stills, Nash and Young version on Deja Vu LP, plus Mathews Southern Comfort version.

I was going to High School in Bennington, Vermont and living at my grandmother’s house. I was 15 and playing in a band calling ourselves Parallel of Time. Funny, the first 3 letters are POT. We played top 40 songs at High Schools and Colleges.
We couldn’t get the name on the bass drum to come out right so we made it P.O.T. Inc. Anyway, friends of mine had asked me if I would like to go down to Bethel New York. They were having a big outdoor concert. I said no that I had to work and had play dates already set.

When they got back they were excited and said you would not believe who was there so they told me. I said ____! They also told me back naked girls and sliding down in mud and having a blast. No fights. I missed out on the biggest event with all my hero’s. Back then everyone stuck their thumbs out to get rides. The town’s people helped with food. No one realized it was going to have that many people.

I don’t know if kids today could do it without their social media.

But my Generation did which is so Groovy!!!!!!

hey, great song! And I haven’t been to Woodstock, I was eleven years old in the Netherlands. But I had a drumkit made up of soap-boxes en lids of cooking-pans and played it withy the knitting needles of my mum. But in my experience I was there, on stage playing the drums with Ten Years After and the Who! I made a lot of noise!
We were all certain that Woodstock would change the world, and I still am convinced. The Age of Aquarius has begun! Never give up and hold your faith!

Hello, I attended the Woodstock Festival Aug 15 – 18. It cost me $ 18.00 dollar for three days of music. In the end it was like 3 1/2 days. It was one of the greatest event of my life. All the acts that appeared. I went with three other friends. I member it like it was yesterday. We took a bus from Port authority New York. We got as far as Bethal White Lake. The traffic was at a stand still. We walked the rest of the way to the concert site. It seemed to take forever to get there. Once we were at site we got a close to the stage and
did not like the view. So we move back until we could see everything. It was very hot and we watched as Richie Heavens open the festival. From that point on it got better and better. There were times during the three days it rained. Especially that first night. But the music made it all worth while. I saw brand new group. Santana , Crosby,Stills Nash, Mountain, Creedence, Sha Na Na,Jimi Hendrix and the band of Gypsies ( not experience.)
My favorite day was the second night. Sly and the Family Stone came on near 1 am and got the place jumping with his music. Take you Higher. They were great. Then The Who followed doing their classic and Tommy the Rock Opera. When they were done dawn was breaking. It was great. The last act for that night which was day now. Was the Jefferson Airplane. The saddest thing for me was Monday morning Jimi Hendrix played to the smallest crowd. Under 75,000 people. He was one of the top acts and finished the show.
Playing to the least amount of people. That was sad. I still have my original ticket stubb which treasure to this day. It ended up a free concert. The following year me and my same friends that went to the festival. Went to Woodstock on it’s anniversary. We got to me the owner of property Max Yasgur and had a nice talk with him. Yea there was a lot of
things that went wrong on the planning. But it was the first of it’s kind, back then. It was advertise as three days of peace, fun and music. It ended up being that way for me.

Guess what? I was there!!! It was the summer before my sophomore year in college. I am glad that you allow us to add pictures, you may be interested in seeing these:
My friends and I were there for Saturday and Sunday and were upset when they made it a free concert – we got ripped off for $14.00,

Check out my Introduce myself. There is a picture of my Woodstock tickets. Original ones ladies