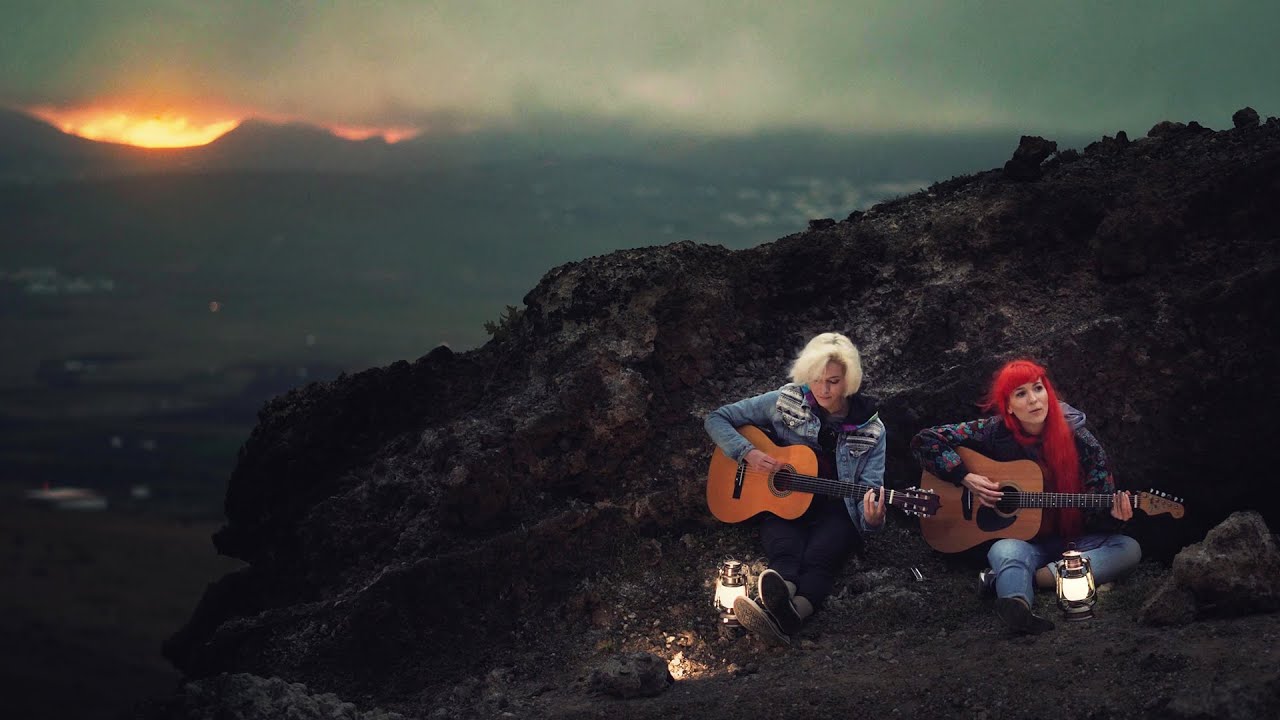 We filmed this cover of "Starman" on the Martian looking volcanic island that is Lanzarote during our trip there in January. It was the perfect setting. Every time we left the house it was impossible not to expect a UFO to take off behind one of those outlandish looking volcanoes.

We've always been fascinated with space and the question of what could be "out there", ever since we were little kids. Our dad always used to tell us a made-up ongoing bed-time story over several years. It was about two kids, Johnny and Clarissa, and their intergalactic friends, travelling through the universe, exploring new planets and meeting starmen on wild adventures.

Naturally, that planted a strong curiosity about everything outerspacey and we've loved “Starman” ever since we first heard it and were old enough to understand the English lyrics. It captures our feelings about the vast and mysterious universe spot on.

Needless to say, we loved working on this song!

Please let us know what you think of the new "Starman" video in the comments section on YouTube or right here underneath this post. It's the first time we've done a Bowie cover and we're curious to hear everyone's thoughts.

Lots of love you all and stay groovy,
Mona & Lisa

You two are the most exciting thing I’ve heard in many, many years! Two beautiful young ladies doing beautiful songs beautifully. Somehow we missed doing Starman back when I was in bands, but you did a fantastic job on it–makes me want to go out and play again! Just superb on instruments, harmonies, everything. Glad to hear that old, great music being kept alive.

First time I have heard you singing and loved it. My husband had found your music on u tube. We grew up with the Beatles music and we have now just reached our 70s and found your music fascinating. All of it not just the Beatles. Loved your video in Lanzarote our favourite holiday destination. Take care x

I loved the cover. Do more Bowie, put this on an Album/CD/Stream (whatever they’re called nowadays) and people (read ME) will buy!!!

Congratulations. That versión of David Bowi’s songs is fantastic.
I’m writting you from hospital and I appreciate your vídeo so much.
Keep in same way.
Love&kisses.
Manuel Vilar

Starman is one of my favorite Bowie tunes. What a gorgeous rendition! Your harmonies are superb!

i could talk all day and night and for weeks about that era. i graduated hs in ’68 at 17. When I was in hs, i was in the best School marching band probably in the world, and in a Musical band/group playing for money all over West Texas and south/central New Mexico for years in high school (you could get a drivers license at 14 then in Texas) called “The Endless Trip Ungrateful” ,(65, pic included – ‘68. I could have gone with some people to Woodstock but my parents were too old, and i was afraid to leave them and go off so far with hardly any money and uncertainty about what might happen.I was from FAR West Texas in Monahans. Because of the Vietnam war and my parents wanting to go back where they were raised, we moved in late summer of ’68 to central Texas area around Weatherford, TX., for me to go to College and NOT go (be drafted and sent) to Vietnam !

Woodstock was the FIRST mass show of the Power and communication potential for YOUNG, well educated (back then USA Schools were the topped ranked in most categories, especially Science and Math A High School education back then was close to a College Degree or more Now, and for about the last 40 years. After my generation , with plenty of help from elders too, WE STOPPED a War “THEY” were throwing. — So, “THEY” WENT TO WORK DESTROYING our school SYSTEM, BECAUSE THE PEOPLE WERE GETTING too SMART AND AWARE AND QUESTIONING THE CROOKS running OUR COUNTRY. High School graduates then had many basics down very WELL and could think for themselves – objectively. ) Almost exactly the opposite of Today’s campuses and students.

Woodstock was the first melting pot for organizing and communication of young, well educated, aware, thinking young people and others older to congregate and organize AGAINST the Vietnam ‘for profits WAR’. It was the centerpiece for beginnings of culminations, to the People ENDING the bogus , illogical War thingie (the Vietnam war) and invoking PEACE philosophies! Massive organization and hype for Protest against the WAR was forming everywhere before and after Woodstock & it was its first big melting pot showing the potential power of the youth who were being sent as cannon fodder to the killing fields and national DEBT producing charade. Immediately followed in the next weeks by the Atlanta Music Festival (300,000 + attendees), and the Texas International Pop Festival, just outside of Dallas (300.000+), which I went to and saw Led Zepplin, and other big acts who were in these Festivals – the Beatles were closed down for Live performance after ’66. It was on Labor Day weekend August/September, before schools started in ’68. TV shows, Laugh In, comedians, Newspapers, musical groups and their songs, even the tv news, all played roles in spreading the word to STOP the so-called War. College campuses, where Draft dodgers were being further educated by professors that were with the Youth and the ending of War and advocated individual investigation, open minded inquiry and free thinking and Music that was anti-War abounded also on campuses and in Society. Almost exactly the opposite of Today’s campuses.

Social change too was everywhere, youth with their own opinions and voices, more natural sexual openness and women’s liberation – meaning = not having to wear bras and having the ability to wear mini-skirts and bikinis , and have premarital sex openly without social stigma and ‘slut’ tagging. — It was soon to be taken over and subverted by c i a assets/agents like Gloria Steinham to warp that legitimate movement and move more into a DIVIDING strategy feminism movement, and espousing the man-hating, ‘female superior’ nonsense and lesbianism/gay advocation foe the Agenda of ”THEY”, the Controllers of the World — until recently — and their Plans for the “New World Orders” Take Over for the Rothschild International Banking Empire and assoCIAted Families. — Only with Trump’s Election that is finally all being dealt with and toppled to set Us Free again after thousands of years of the masses of Earth being Controlled and Suppresed by usurpers and Families !

That is a Realistic Assessment from the 60’s ‘till now, from a Government and Scientific Analyst , with a very high IQ and enlightened Soul, who has known exactly what was happening in the World – in Reality and Secret for over 50 years and longer. Who has been trying to expose it to People any where I could reach them, and who organized and sent out many Information Warriors for Humanity and Mankind through the last many decades to usher in this new era of awareness. The Taking Back of OUR Country (the USA), and freeing up of OUR World to realize needed freedom from oppressors, and achieve awakened Progress for Earth’s Mankind and ‘Progress to the People’ from being the “Controlled” to being the natural, rational, free Individuals which we are intended and entitled to BE — free !

PS: If you have never seen ‘starman’ the movie you should and the movie ‘contact’

Love it! Just like everything else you guys do,
Amazing