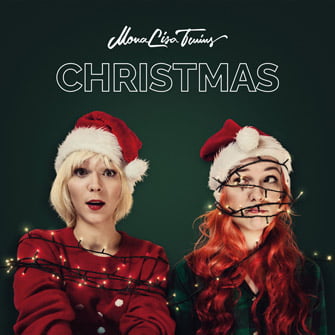 It has become somewhat of a tradition for the MonaLisa Twins to release a Christmas song for their fans every year. For the holidays season of 2019 they decided to take it a step further and release a full-length album, simply titled CHRISTMAS. It includes interpretations of some of their favorite holiday songs ranging from John Lennon’s “Happy Xmas (War Is Over)” to some (translated) traditional German ballads they grew up with.

The album also features the brand new original Christmas song “All I Want Christmas To Be” which got instant terrific feedback from their fan base and music world alike. Testimonials, a track list and an audio player can be found further down this page.

Mona and Lisa Wagner’s perfection of sibling harmonies, guitar focused musical minds, and their deeply rooted love for the classic 60’s style sound reflects in the arrangement of many of the songs on CHRISTMAS.

With its fair share of jingle bells, tight harmonies and tranquil moments the album is definitely “Christmassy” but it also includes a lot of tongue-in-cheek lyrics, quirky instruments, and jazzy vocal and guitar parts that made for some more “out there” arrangements.

"They're fabulous, sure as you're born!"

MIKE MCGEAR
THE SCAFFOLD
"They are a breath of fresh air in the relentless sludge of today’s pop music."

Original Single -
All I Want Christmas To Be

‘All I Want Christmas To Be’ is MonaLisa Twins’ Christmas original. It’s a song about early childhood Christmas magic, and about their feelings and experiences growing up in wintery Austrian Christmas tradition … a very personal addition to this album, otherwise filled with interpretations of well-known holiday songs.

A music video for this song will be released on YouTube on December 1, to add to their already published Christmas videos of past years, two of them being …

Have Yourself A Merry Little Christmas

The MonaLisa Twins, with 25-year-old actual twins Mona and Lisa Wagner fronting the band, are one of the very few modern groups who continue the tradition of song-writing that took off in 1963. They bring back what has been started 50 years ago and write modern songs in the 60s Beat music tradition, reviving the genre with a fresh twist without sounding pop-ish or trivial. Their signature features are their close harmonies and wiry, bright guitar sound, and the mix of humour and depth in their music speaks to a wide range of international audiences.

They were born into a country (Austria) that celebrated classical and folk music and which was rather detached from the humorous, easy going 60s spirit you associate with England or the States. They picked their parents wisely though. Their father is a musician/song-writer himself and, during the 80s and 90s, was running a recording studio producing renowned (inter)national artists including a Grammy winner. Together with him and their step-mother they fully concentrated on the Twins’ music and over the years built up a full-time family business.

10 years, 8 albums, 100+ music videos, 34+ million YouTube views, 100,00 subscribers and a lot of blood, sweat and tears later, they are living and working in Liverpool/UK. With a host of live shows in Europe, the UK, USA and Australia, a recording session in Abbey Road Studios, a UK tour with Steve Harley & Cockney Rebel, a 2-year long residency at the legendary Cavern Club, regular features on BBC and international radio stations, a Glastonbury performance and collaborations with Woodstock legend John Sebastian under their belt, they have come a long way since daydreaming about the future at the age of 13.

“I am so glad this hasn’t become an overly sweet or rocking Christmas CD. I have too many of those I will never listen to again in the future.”
M. Walker (Album review)

“What the Twins did with the songs is simply remarkable. I’ve listened to some tracks from other artists and this is better than anything else you could hear or get. The worst of several bad examples for me is ‘Santa Baby’. Not a single version on Youtube does even remotely measure up to the quality and charm of the MLT version.”
M. Jackobs (Album review)

“There are literally hundreds – probably thousands – of Christmas albums in existence. The majority of them simply copy the same songs that every other Christmas album has copied. The better ones might have one or two stand out tracks … I pre-ordered my copy within minutes of getting the email that told me I could. I can’t remember EVER looking forward to an album’s release more!“
YouTube Subscriber Kristine Martin on Little Drummer Boy

“Perfect … This should be played on radio stations each Christmas instead of repeating the same songs every hour. Beautifully performed and produced.”
YouTube Subscriber Steven Airheart on Little Drummer Boy

“OMG, this is great!! What a welcome change from the dirge-like melancholia this song is usually draped with. Fun, fresh, energetic and oh so very merry!! Love this. Love it! Love it!”
YouTube Subscriber John Edwards on Have Yourself A Merry Little Christmas

“I hate Christmas music with a passion. But your Christmas CD is awesome! I would never have expected anything like that !!! “Silent Night” – amazingly beautiful ! Also “Walking In The Air”, “Drummer Boy” and “Santa Baby”. John Lennon should hear your “Happy Xmas” version. Top-notch ! And the little German surprise in “Snow Falls Softly …” such a nice touch.”
M. Schuhmacher (Album review)

“It appears that you have made an instant classic with ‘All I Want Christmas To Be’. Congratulations!”
L. Pitts (Album review)
….
Read more in the Press Kit Download

Leave Us A Message: