Press-Echo in 3 Regional Newspapers and more … 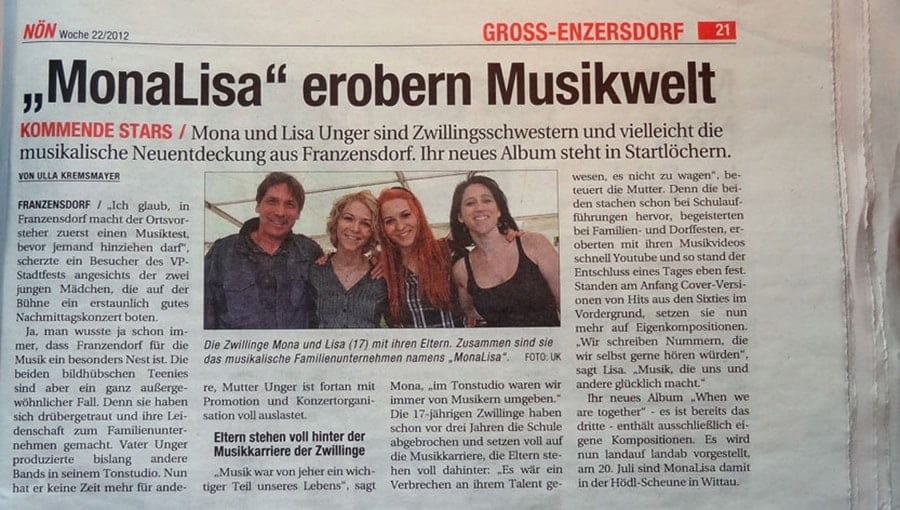 As a newcomer you can only wish for such a bombardement of press articles!

Big thanks to Mrs. Ursula Kremsmayer for her wonderful half-page article about us (see picture above).

Translation:
“MonaLisa” take over the musicworld
RISING STARS / Mona and Lisa Unger are twins and may be the new musical discovery of Franzensdorf. Their new album is ready to take off.
FRANZENSDORF / “I think, Franzensdorf’s mayor let’s people take a musical test before they are allowed to move in”, one of the visitors of the festival was joking after he saw the two young girls performing a surprisingly good afternoon show. Yes, we always knew that Franzensdorf is a very good home for music. The two gorgeous teens are a special case though. They were brave enough to make their passion into a family business. Until now dad Unger produced other bands in his recording studio but now there is no time for that. And mum Unger is henceforth busy with promotion and concert booking.
PARENTS TOTALLY SUPPORT THE TWINS’ MUSICAL CAREER

“Music has always been an important part of our lives”, Mona says, “In the recording studio we’ve always been surrounded by musicians”. The 17-year old twins left school three years ago and are now completely concentrating on their musical carreer, their parents fully support them: “It would have been a crime not to try it, considering their talent”, mum says. Because they already stood out in school performances, family and village parties and got very successfull with their music videos on Youtube, the desicion was clear one day. At the beginning they started off with cover versions of hits from the 60’s but now they are focusing more on their original songs. “We write songs which we ourselves would enjoy listening to”, Lisa says, “music that makes us and others happy”.

Their new album “When We’re Together” – it’s their third one already – only has original songs on it. It’s now getting presented all over the country, on the 20th July you can get to hear MonaLisa in the Hödl-barn in Wittau.

The Photo article and the 3-column text (with a short note on the cover page by the way!!) in 2 different regional Austrian newspapers were written and photographed by Mr. Walter Vymyslicky. 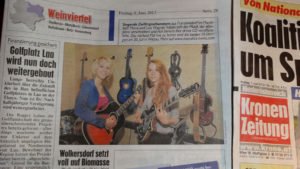 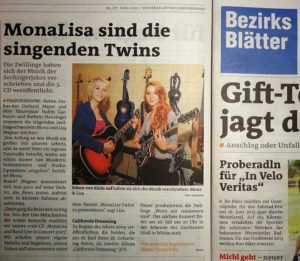 Translation of the 3-column article:
MonaLisa are the singing twins
The twins devoted their music to the 60’s and now released their 3rd CD.
FRANZENSDORF. Besides discus-star Gerhard Mayer and the dancing couple Vadim Garbuzov and Kathrin Menzinger (Austrian “Dancing with the stars” show) the singing twin-sisters Mona and Lisa also come from there [Franzensdorf].

“Music has always been a big part of our lives and as our dad used to run a recording studio we have always been surrounded by musicians and studio equipment”, Mona says.
Rudolf Wagner now only works with his daughters which performed their first concert back in 2007. “That’s when the journey really started. With the live recordings of this first concert we produced our first album “MonaLisa and Band Live in concert 2007”. We built our own website and started putting our music videos on the internet under the name of “MonaLisa Twins”, Lisa explains.
CALIFORNIA DREAMING

At the beginning of 2009 the two girls, which will celebrate their 18th birthday on June the 16th, published their 2nd album “California Dreaming” (EP).
This year the twins produced “When We’re Together”. The next concert will take place on July the 20th at 8pm at the barn of the restaurant “Hödl” in Wittau.
From our regional autor Walter Vymyslicky

Mr. Hannes Höttl of “wieninternational.at” (Vienna international) online news did a long interview with us and another Austrian band. Under http://www.wieninternational.at/de/content/zurueck-die-zukunft-de you can read the whole text. We have no translation for that until now but you can use Google translator or similar tools. Like in all the other news we find ourselves portrayed in a very positive way.

We thank all reporters very much for their interest in us, in our music and in promoting youth in general. We are very happy about this support!