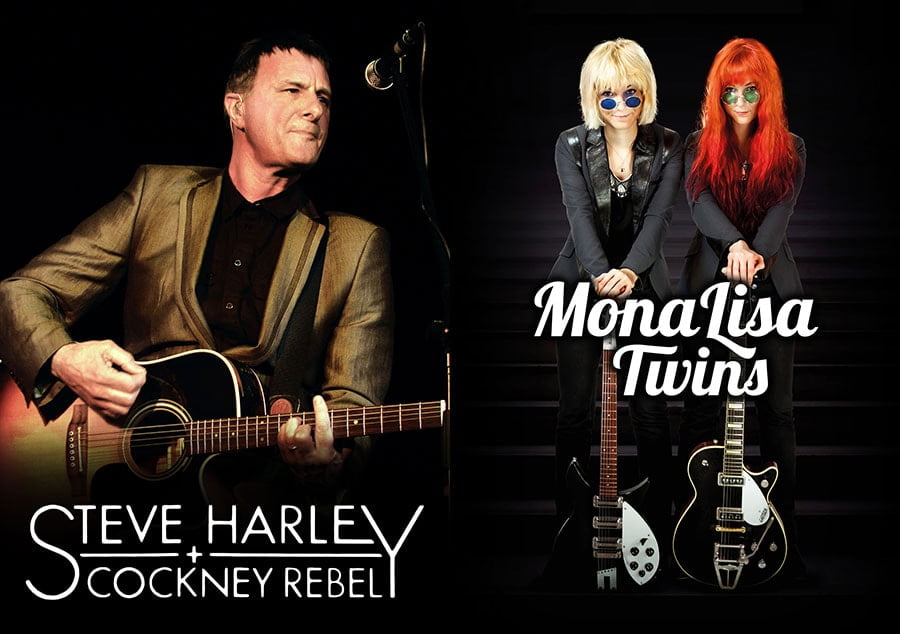 “The MonaLisa Twins will be big, really big. I want them in my touring band!”

To use a British expression, imagine how ‘chuffed’ we were when we read this on Steve’s Facebook page. And today we are over the moon to be able to finally let you all into our big secret. It is going to happen!

We are going to be part of Steve’s band for a UK tour this November! So hopefully we will be able to meet lots of you guys along the way. Here you’ll find all dates and cities we shall be hitting. But first let us tell you how this amazing team-up came about …

Our dad used to buy Steve Harley & Cockney Rebel‘s records when they came out way back when. He introduced us to Steve’s music when we were kids and we loved it. Last year we mentioned this to our friend Tim Quinn. It turned out that Tim had produced a couple of shows in the past with Steve. It’s a small world! Anyway, unknown to us, Tim sent Steve some of our YouTube links. Steve watched them and that planted an idea in his mind. He asked to meet us the day after our showcase gig at the Half Moon in Putney, London.

That’s how we found ourselves sitting around a table with Steve Harley, enjoying tea and biscuits. Talk about Rock & Roll!

We felt a little nervous going into the meeting but Steve was lovely and soon put us at ease as we talked and laughed about many different topics. It turned out he really liked our music and sound! And then, into the conversation he dropped the fact that he would like us to join his band for their upcoming tour in November.

The show would comprise one set of tracks compiled from fans’ requests, plus a performance of “The Best Years Of Our Lives” album in its entirety, for the first time ever. We would play alongside his band members on Steve’s own songs and also perform some of our originals druing his sets! Amongst his band members would be original “Best Years” musicians Jim Cregan on lead guitar, Stuart Elliott (drums), Duncan Mackay (keyboards) and long-standing Cockney Rebel member Barry Wickens on violin and guitar. We would be sharing lead and rhythm guitar with them, as well as backing vocals and percussion!

We looked at each other in amazement about such an incredible proposal. Steve asked us to think about it and possibly not book any shows for November. By the time we had stepped outside of the building we HAD thought about it and you bet we KEPT November as free as can be!

And so, for the past few weeks, alongside the new material we have been working on in our studio, we have also been playing Steve’s songs to get ourselves in the right groove to fit in with Cockney Rebel. It’s all coming along nicely. If everything goes to plan we shall be popping up in the media with Steve from September onwards to promote the tour. What an absolutely unique experience these shows will be! We can’t wait.

We really hope to see you down the road! Take a look at the wonderful venues we shall be playing and book today. Tickets are going fast!

Please note: This action will also remove this member from your connections and send a report to the site admin. Please allow a few minutes for this process to complete.