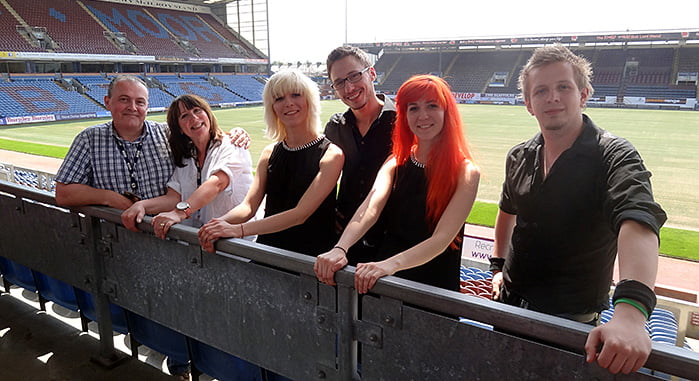 For some weeks now we’re having a weekly spot on the BBC Radio Merseyside Saturday morning show with Billy Butler, a well-known radio legend from the 60s till today! Tune in every Saturday at about 11am to hear us cover a 60s tune requested by a listener! We will also do the same on BBC Radio Manchester with Mike Sweeney, a well-known musician, former member of the “Swinging Blue Jeans” and radio presenter for decades. We’ll play a show together with his band on July 4th in Manchester.

We thank both presenters for their immense support, as well as Sally Naden from BBC Radio Lancashire who has had us on her show twice now. She also asked us to perform our song “The Wide, Wide Land” for the start of “Dementia Awareness Week 2014” which was broadcasted live from the Alzheimer’s Convention at Burnley Football Stadium (see photo above).

The song is from our debut album “When We’re Together” and is about our grandma who sadly suffered from Alzheimer. Our dad, who was her son and who experienced the development of the disease the strongest, wrote the lyrics together with us, which got now printed on post cards sent out by the Alzheimer’s Society to raise money for the cause. Singing this song in front of dementia patients and their carers was a very emotional moment, bringing back memories of our own granny! Please help if you can: http://alzheimers.org.uk

However, the biggest broadcast we got after being in England for just 6 weeks, was the show of the legendary Johnnie Walker on BBC Radio 2. National Radio that is! We’ve been part of his segment “Sounds of the 70s” and talked about our favorite tunes of that era. It was an amazing experience at the London BBC studios, and we also want to thank him for his lovely quote:

“Have listened/watched YT vids of God Only Knows, San Francisco and Hotel California – they are incredible. I’ll do all I can to spread the word about the MonaLisa Twins.”
Johnnie Walker, BBC Radio 2

Thanks to a large-scale radio campaign two of our songs – “The Wide, Wide Land” and “This Boy Is Mine” – are getting regular airplay on a couple of other local UK radio stations including BBC 6 music, BBC Radio Shropshire, Kent, Norfolk, Sussex and even Wales, as well as on many more small and big radios all over the world. It is a wonderful feeling to watch the spin reports and see the own songs in powerplay, one of them even on #1 of the European Country Music Association Charts and #20 of their Global Top 25.