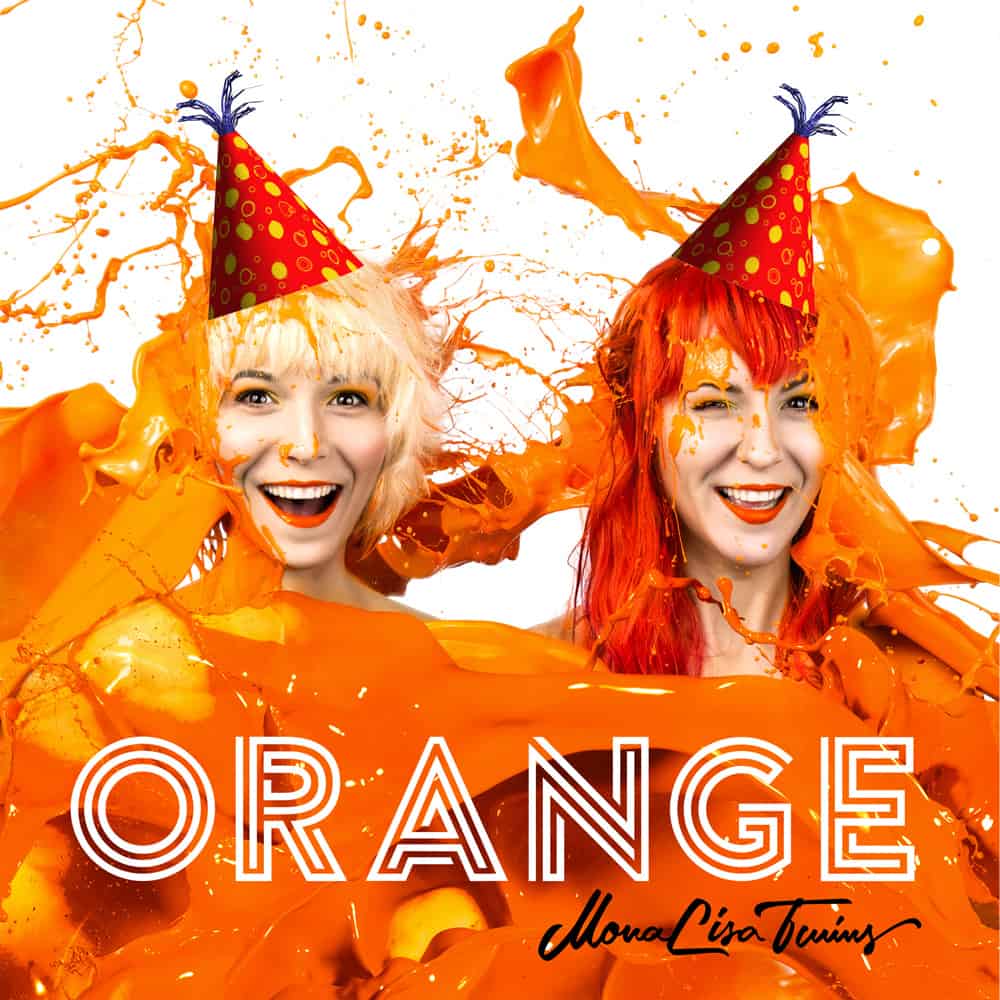 Our album ORANGE is turning 1 today, the 29th of September, so it’s time to put on some party hats, throw confetti and blow into those party horn thingies.This year has flown by in a heartbeat but it was filled with many things ORANGE. From shooting some music videos to promoting the record to setting up new ways to let the world know about it. Lately it has mainly filled with new projects though but more of that soon …For now, let’s get back to ORANGE.

It started off innocent (“Let’s write a new album”) …

But soon turned into an ORANGE mess (the best kind) …

Ideas, sounds, fills, work, John Sebastian, guitars, practise, melodies, 60’s, a song writing trip to Lanzarote, harmonies, all-nighters, family, 2017, rhythm, a splash of orange juice … Mix and stir it well and out comes what is now sitting on our and many of your shelves, in the form of CDs and Vinyl.

Since we’re looking back on ORANGE, let’s go over some of the songs on the album:

Still A Friend Of Mine:

This is our most recent video for the song that seems to be many people’s favourite, according to the feedback we have received. “Still A Friend Of Mine” is the last track on the album and also the last one we’ve written.We’ve heard many fan theories about who this song is about and we love them all. You’re all right, because who are we to say? We have our own theory though! 😉

This video also celebrates its 1st birthday today. “Waiting For The Waiter” is one of two songs on the album that features John Sebastian – a living legend and wonderful man who made his name in the Lovin’ Spoonful, in Woodstock, through countless collaborations with bands like the Doors, Jimi Hendrix, Crosby, Stills, Nash & Young (and to our surprise, now: us!) and many other musical adventures.Definitely our bluesiest venture on the album:

Once Upon A Time (ft. John Sebastian):

The other song was “Once Upon A Time”, the track we originally approached John Sebastian with. When writing it we wanted it to be somewhat of an hommage to Woodstock and the spirit we associate with some of the music back then. To have John, who performed there back in ’69, play the spine-tingling bluesharp intro and solo could not have been more appropriate.We haven’t made a video for this song, so please consider getting the album to listen to the track (if you haven’t already ♥). Every purchase in our web store allows us to work on future projects and create new albums, videos and collaborations like this.

Do you have a favourite off the album? Maybe one that wasn’t a single? Let us know in a comment below! We appreciate your feedback …

We might be celebrating ORANGE’s birthday but what we really want to celebrate is all of you groovy people and every single one of you who has a copy (or a download) playing in their home, office or car. You have made ORANGE a success. It’s all fine and dandy making a record that WE like. But it’s the fact that you seem to like it too and went to the length to buy it that enables us to make more … (another hint ;-))

For me, ORANGE is one of the greatest albums of all time! It far and away surpasses anything offered in the mainstream of that which is called “music.” It incorporates all of the elements of what I have considered to be near and dear over the past 55 years. The song that touches my heart and soul the most is “Count On Me.” The lyrics, vocal harmony, musicianship, and instrumentation in this beautiful song are second to none. This album deserves a prominent place in the collection of every lover of great music. It is so evident that this album was crafted with the utmost attention to every detail and delivered to us fans with a mountain of love. From the bottom of my heart, I thank you Mona, Lisa, Rudi, and Michaela.

Each track is within its own realm of uniqueness yet flavoured with MLT Essences we’ve come to know and love.

The gift of interweaving both vocals and instrumentation in whimiscal yet profound tones and variations proves keenworthy.

A pleasing array of funky and fab with dash of fun and heartfeltness makes for one’s fill of entertainment satisfying . Guilty as charged for singing along.. .dancing….airguitar/airdrumming….one cannot help it. Kudos for making this an album for the century and generations to come forth …

Hi Mona,Lisa,Michaela and Rudi,Firstly can I just say a massive thankyou for producing such an incredibly stunning album,since I received my copy from you 12 months ago, which contains a beautifully diverse selection of blues/rock/pop/ballads,I play it daily both in the car and whilst at work,also coupled with your outstanding debut album WWT. Now to my favourite track(s) in reverse order..’Thats Life’…’Club 27’…’Waiting for the waiter’…’In it for Love’…’Close to You…’Once upon a Time’…and finally…(drumroll….)..’Still a friend of Mine’ which in my honest opinion, should be nominated for an outstanding musical achievement award..this song stirs up so many emotions,in much the same way as ‘ Wide Wide Land’,it’s so beautiful on all levels…you have an immense musical talent. A huge ‘Thankyou’ from the bottom of my heart and I wish you all continued good luck,success and happiness for all you do in ‘The Future’. xxxx

Peter, I have so enjoyed enjoying Mona and Lisa and their music along with you and countless others!

My favorite song of the album is Club 27.
An affectionate greeting, Walter.

I love every track on the album… and it’s hard to pick just one (Waiting For The Waiter, Club 27, Still a Friend of Mine, Sweet Lorraine…) they’re all so great! By to be honest, I think I really love “That’s Life” the best!!! Such an inspired song, and an absolutely wonderful video! And incase anyone’s interested, my favorite from When We’re Together is “Nothing Is In Vain.”

In the last year, I’ve become such a huge fan. I’ve purchased all the CDs, and watched each video on You Tube more than a dozen times. I have all the music loaded in my car and listen to them often. I can’t speak for everyone here in America… but I love MonaLisa Twins! My only questions are: When will we see the next Album… and secondly, PLEASE tell me when you plan on touring the US? Too soon is not soon enough.

Well, I love many of the songs on “Orange,” but yes, like most, I’d have to say “Still a Friend of Mine” is my very favorite. It’s just so beautiful, and then when you came out with the video as a compliment to it, that made it even better. Not only is “Still a Friend of Mine” my favorite song, but the video is also my favorite video you’ve made. I hope the “new projects” and “hints” you’re talking about is going to be an announcement of your next record/CD coming out soon! Keep it up! Lovin’ it! 🙂

To choose one favorite song off such a great album is really, really hard!!! Forced to choose, my favorite would be “Sweet Lorraine”. Reminiscent of the 60s and Beatles, but timeless and awesome for any decade in the tradition of Penny Lane. Yellow Submarine or Help Me Rhonda.

The best song on the CD is Club 27. I wish you would make a video about the song. The entire CD is awesome.