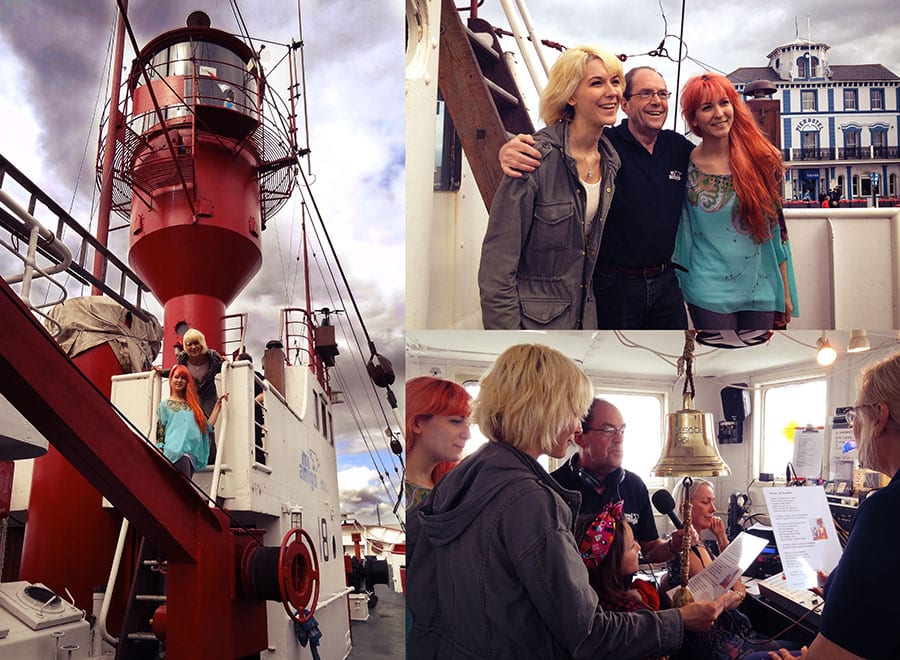 “Pirate Radio” in the UK first became widespread in the early 1960s through music stations such as “Radio Caroline” and “Radio London” who started to broadcast from offshore ships in international waters. At that time BBC radio had a very limited airtime to play pop music whereas the pirates were broadcasting 24 hours a day, 7 days a week!

By 1965 they had about 10 to 15 million daily listeners and it still took the BBC two more years before they created Radio 1 which would play pop music for the new generation. The UK government also put a law in place to close the ‘international waters’ loophole. However, Radio Caroline continued to broadcast until 1990 (with off-air periods between 1968–72 and 1980–83).

Last week we visited the LV18, which is a survivor from the heyday of British shipping and the southern sister ship to the Lightvessel “Planet” berthed on the Liverpool docks. Lightvessels like that used to help other ships navigating through the dangerous waters around the UK coasts and they still protect them from running aground. The LV18 is now a beautiful museum and anchored at the docks of Harwich. Once a year people like Programme Director Tony Currie (BBC Scotland, International Radio 6) bring pirate radio back for a week, in this case to celebrate “50 Years of Pirate Radio“! Last year we’ve been in Liverpool, and this year we were honored to join the pirates in the South!

Tony Currie (the man in black) and his team delivered a wonderfully varied and informative program with lots of good music, just like in the old days. Speaking of good music, in 2014 his radio also voted our song “This Boy Is Mine” Record of the Year :). We were invited to play some of our songs acousticly and also do a little interview about our music. They did not have enough mic stands there for voices and guitars, so in perfect pirate improvising manner the other presenters helped out, holding the mics for us while we were playing. On the photo right below you see us all cramped in the tiny little studio built in the tiny little conning bridge, and in the middle of us all our new friend Scarlett who helped everyone as much as she could like a pro.

Last week we got to see many different people and places, and it’s exactly that variety of experiences we enjoy so much. Thanks to all these people who ask us to be part of their lives and projects, and thanks to you for sharing the excitement with us.

Have a great time with your own adventures, and if you want you can tell us about them too. We are always happy to hear from you,