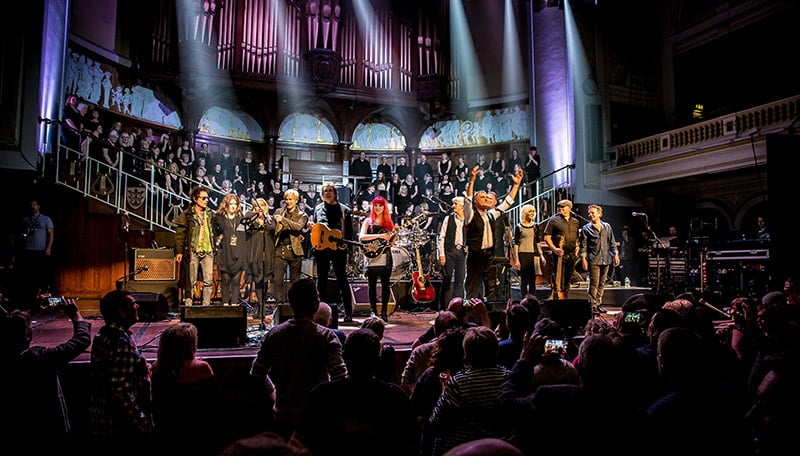 Last week we took a trip across the land to play in Hull. Steve Harley put together a show in memory of Mick Ronson to raise money for a foundation to help young people in the arts.

Ronson is best known for his work as a guitarist, multi-instrumentalist & arranger in David Bowie’s band “The Spiders From Mars”

But he also worked with the likes of Morrissey, Van Morrison, Ian Hunter, Bob Dylan and many more. He left behind a stunning amount of work before he passed away in 1993.

Steve Harley got together his and Mick’s mutual musical friends and put on this wonderful show. They raised money in Mick’s spirit to give to young students to further their musical education.

The stage was packed with fantastic musicians and it was an honour to be playing amongst them for such a great cause. We played some classic Bowie songs together with Mick Ronson’s daughter Lisa and sister Maggi. The “All for One” choir also joined us for a hauntingly beautiful version of “Sebastian” and we rocked the stage with guitar legend Earl Slick.We listened in awe to Steve Norman’s (Spandau Ballet) saxophone solos and of course enjoyed the heck out of playing Steve Harley’s songs together with his brilliant band! We also performed some of our own music, just the two of us, to a wonderful, appreciative crowd.

Biggest thanks to Steve Harley for letting us be part of this, to Mick’s family and everyone involved. Here’s a review from Steve’s diary (we got a nice mention too). It says that “£35,000 were raised for a Mick Ronson Music Scholarship for a Hull-based youngster to study Music or Sound Tech“. Isn’t that just wonderful? Thanks to all the lovely people who made that possible !

We don’t think anyone left the room without a smile or maybe even a cheeky little tear on their face.