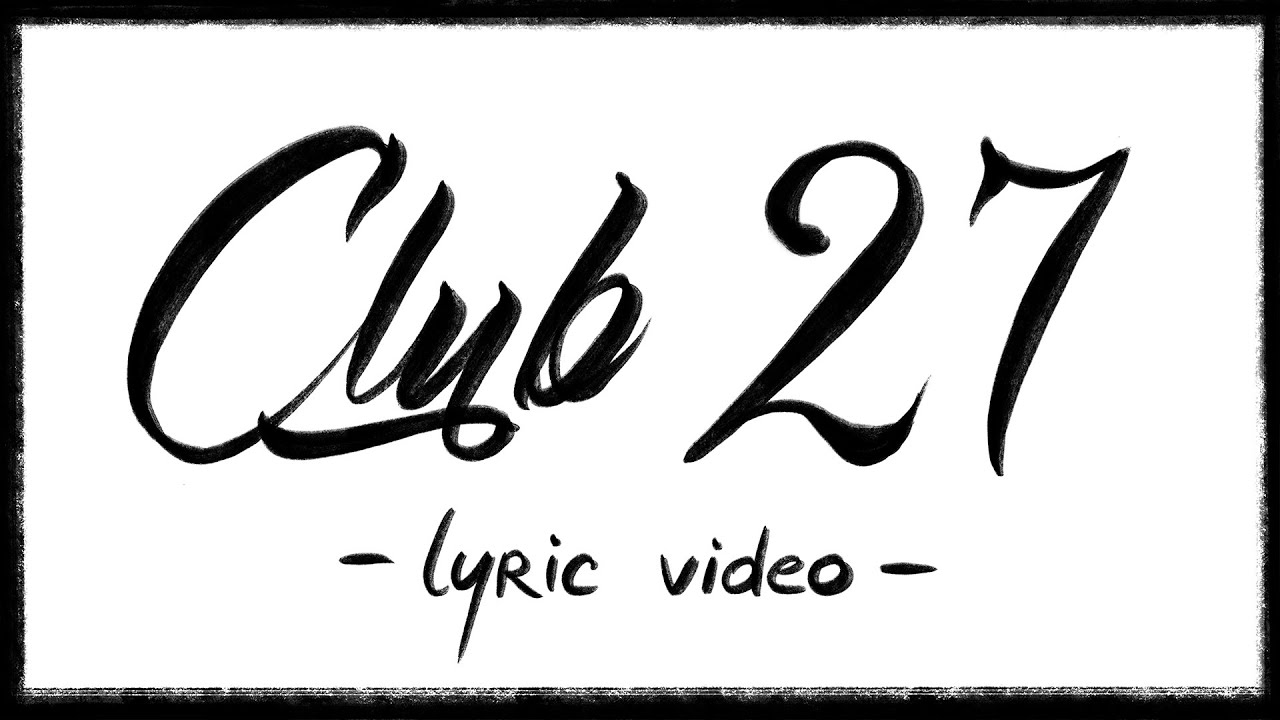 Gather round, you girls and boys ...

Today we are celebrating our 27th birthday so we simply had to post this song – first released on our album ORANGE.

It’s called Club 27 and pays homage to all the wonderful talent we have lost at the age of 27, an eerily common age for famous musicians to pass away at. This phenomenon has led to the creation of the 27 Club, an unofficial list that includes the likes of Jimi Hendrix, Janis Joplin, Jim Morrison, Brian Jones, Kurt Cobain, Amy Winehouse … the list goes on.

We know the timing of this release might appear a bit morbid, but we’ve always had a slightly macabre sense of humour.

Now, we don’t have the slightest of intentions of joining that club this year, so rest assured this isn’t an announcement! We’ll keep eating our vegetables and putting on our seatbelts … We’ve got a new album to finish anyway!

The video was created and animated by the two of us. We enjoyed playing around with it and using some new animation effects that we hadn’t explored previously. We know it’s “just” a lyric video but again … we’ve got a new album to finish!

Here is to all the talent lost too soon and the magic they left behind,

Birthday Sale - 27% OFF everything!

As a little gift from us to you, we are doing a store-wide sale for the next 5 days. That means you can get 27% off everything from our CDs, Downloads, DVDs and Vinyl to merchandise like shirts, hoodies, towels, mugs, posters, guitar straps and more. It also includes the MLT Club membership subscription.

Just enter Coupon Code CELEBRATE27 during checkout and the discount will be applied.

Hi there ladies! My first engagement in this industry was with Gary Numan when he pioneered his own web presence in the early 1990s and my company provided the tech and hosting. Gary’s was a family business as well – and Gary was and remains a complete control freak – in a good way. His brand and image has a been solid foundation for a 43 year career. The original web presence was a pretty straightforward online shop selling swag and tickets – online video was not really up to muster and most users didn’t have enough bandwidth. He’s come a long way since…

I still do not understand the appeal of “modern” chart material; garage, grime, rap etc strikes me as lazy and mostly just “formulaic” noise. Is it because there is just not enough to be made from talented musicians covering the best pop classics from the 70s-90s to put enough cocaine up the noses of all the A&R people involved in the labelled music industry?

And artists like Beyonce seem mostly abouts pouting, posing and frilly knickers. Yes, she can sing a bit, but the songs all sound the same and have little or no subtlety. Money spent on snazzy videos cannot substitute real talent in the long run.

Meanwhile we have been reminded of how real popular music can sound by ABBA, and there is a chance coming for a big 70s revival lead by ABBA – and an 18 year old girl from Agnetha’s home town who is currently causing a stir with her joyous cover of Abba’s “don’t shut me down”. Serch for Emilia Abba and she’s right on top. Most of the fans admit to being over 60 (anad loving it)! SO it’s going to be a very odd – but a golden opportunity to sell proper pop music once again.

One word of advice – you really should try and answer some of the fan comments here and on the videos – maybe get a “ghost” writer to write replies for you?

Just commenting on the incredible bass on all the tunes. The Horner has just the right sound and precision. The whole family’s well taught. Any information on “dad’s” background? If I was told Sir Paul was backing the band I’d almost believe it.

I think a few of your lyrics were lost on some of your fans based on their comments, however they were not lost on me. Titles, and lines from THEIR songs like Jimi’s and Jim’s made yours so much more poignant. Love it! Keep it up. JB

once upon a time I joined the Club 27, too. Nowadays I join the CLUB 63 – as a pensioneer.

I didn’t get in on time for the actual Birthday but I am in now. So Happy Birthday Girls, you’re both so very talented and make beautiful music even more beautiful.

Hope you both had a beautiful birthday. ♥️♥️

Happy Birthday Twins! I myself am going to be the Grandfather of Twin Girls coming anytime now. My daughter is having her first children. Twin Girls and I can’t wait!

Wish the both of you a very Happy Birthday! Enjoy listening to all your cd’s that I’ve purchased.

Here’s to your 27 years of talent and joy and many more of success,growth, and harmonies!

Copyright © 2022 by MonaLisa Twins
wpDiscuz
97
0
We'd love to hear your thoughts, please share them in the comments.x
()
x
| Reply